It's been an amazing month of July! The Night Drivers and I made our Grand Ole Opry debut on July 2nd. It was such a good night. Sure, there were nerves (that's an Opry debut requirement), but I have to say that we just really enjoyed the experience. The Opry was so good to us and they did so much to make us feel welcome.

In the same month, we found out that "Riding the Chief" (which we performed on the Opry) was nominated for IBMA Song of the Year. That's an award that goes to the artists and the writers, so my co-writer of the song Thomm Jutz is also nominated.

In late June, we celebrated our 20th #1 song with "Everybody's Got a Line" topping the Bluegrass Today weekly airplay chart.

Meanwhile, on the touring front, we're about to head to Sweden to perform at the Grenna Bluegrass Festival on August 20, and we'll be teaching at the pre-festival academy there.

Stay tuned for a report about the trip later! 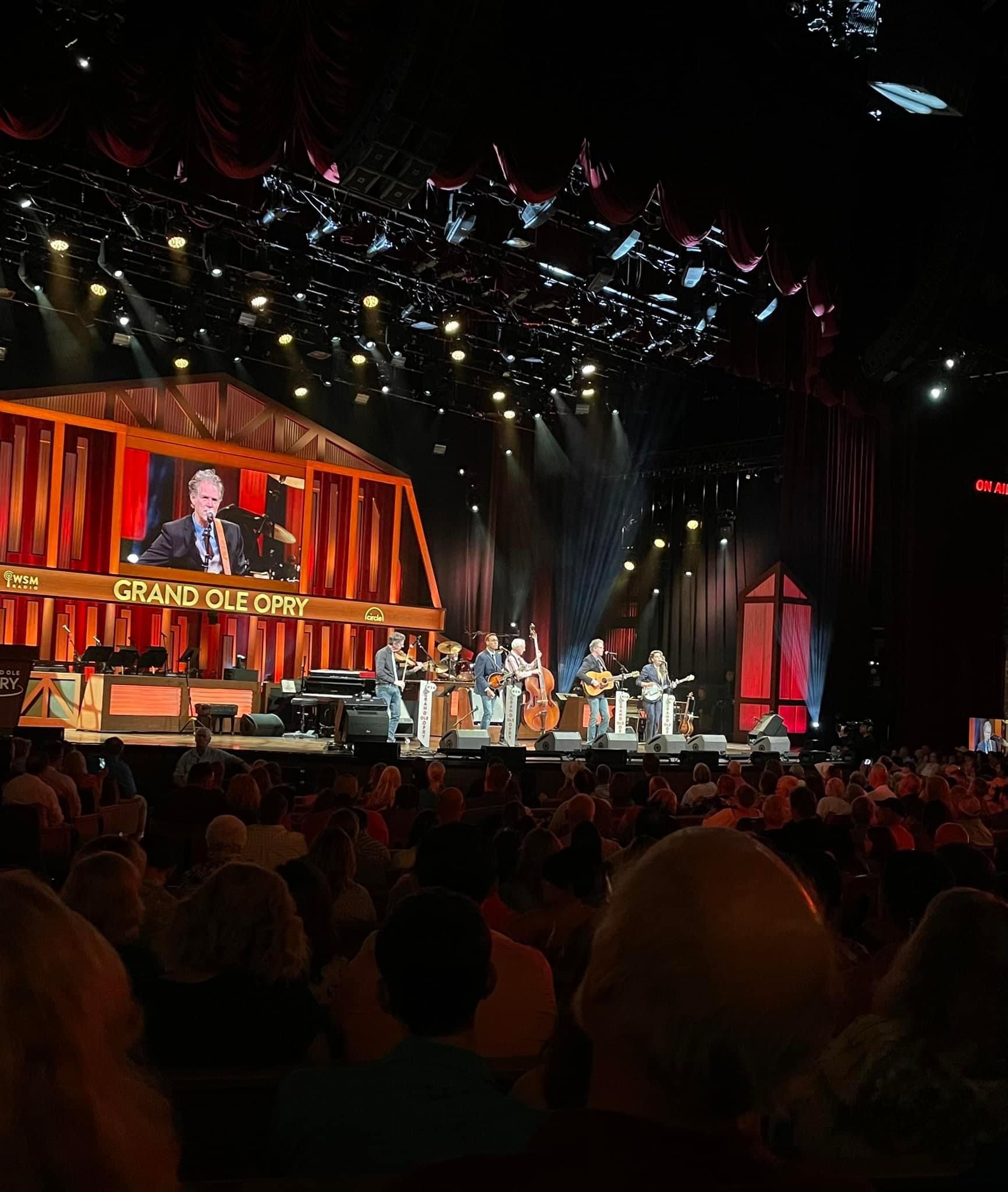 Back on the road and #1 streak continues

Greetings from the Northern Studio, friends! I also want to welcome SiriusXM Willie's Roadhouse listeners, since I'm now with you all 5 days a week in the mornings these days.

We're excited to announce the band's 6th consecutive #1 single, "Bed of Snow." (see video link on home page or right here). So far, every single released by the new lineup of the band has topped the charts. We're pretty thrilled about that. Plus, all six are part of our new album Make Each Second Last.

I managed to get a breakthrough case of COVID-19 while travelling back from Blythe, CA in late January. It wasn't fun, and I don't recommend it to anyone but I know it could have been so much worse. Sadly it necessitated cancelling dates in Texas, Tennessee, and Virginia. Most have been rescheduled (check our tour page).

Touring resumes in late April, starting with a solo show in Memphis and band shows in NC and VA. We can't wait to get back out! See you soon!

Greetings from the IBMA World of Bluegrass in Raleigh! This is a very exciting time for all of us for a number of reasons: for starters, our own Grace van't Hof won an award here for Graphic Designer of the Year. Also, Lynn Morris, a close personal friend, not to mention the wife and longtime musical partner of our bass player Marshall Wilborn was inducted into the Bluerass Hall of Fame.

Meanwhile, we're just days away from the release of "Make Each Second Last" our new album and the first to feature Grace and Marshall as band members. To say we're excited about this release is an understatement. When it comes out on October 15th, it will already have yielded five #1 singles, a record for any album we've ever released. This lineup of the band is now batting 1.000 for #1 releases. It's also the first album of all original material for me. Grace van't Hof designed the album cover (see home page). Check this link to pre-order (or just order or stream if you're reading this after October 15th). This is our fourth album for the Mountain Home label, a place we feel very much at home.

Looking ahead to December, be on the lookout for the release of two new Christmas recordings.

Greetings from Pandemic HQ as we near one year (!) since our last live show. We've all learned to cope with this situation in different ways. For those who are used to being out there playing music for real live people, or for those who just appreciate travel and seeing people and places outside their own living space, it can be a particularly hard time. The origins of the expression "stir crazy" got me thinking of an analogy that's dark but which has been helpful: "stir crazy" is from the slang word "stir" for prison, and I thought if we could think of this time as a kind of prison sentence, it might actually change our outlook. It is a kind of prison sentence, but under much nicer conditions and way better food (we hope), not to mention that we aren't separated from immediate family members, and we have the opportunity to freely stay in touch with people we care about anywhere in the world. True, we don't know exactly when we'll be up for parole, but parole is definitely on the horizon now, and that's cause for hope. People are wrongfully imprisoned all the time or are thrown in stir, in jail, in chokey, in the calaboose, etc. in some places just for speaking out about issues. This could be one of us, but instead we're just doing our best to get through a very cushy stretch of jail time, with livestream concerts and trips to Costco.

Even from the big house, we've been able to release new music, and I'm grateful for that, too. Our latest single was a song I wrote called "Quiet Click." I was particularly happy when this made it to #1 on the weekly bluegrass airplay chart published by Bluegrass Today. For one thing, it marked three straight #1  songs for the new lineup of the Night Drivers (with Marshall Wilborn and Grace van't Hof joining me and Mark Stoffel). It was also really the first single we've ever released that was more in the country ballad category than uptempo grass (what we would call a "ballad" in bluegrass music is in this case really a shuffle in country music), and I was really pleasantly surprised by the great response. a few weeks after hitting #1, the song even made a return trip to the top of the chart, so thank you to DJs and fans who have asked for the song for making this possible.

Meanwhile, on March 5th we released our brand new single, "Whither You Roam" which is an uptempo grass number, the fourth single so far from the new band. There's a link on the home page, but in case you missed it, click here to download or stream the song on the service of your choice. Without getting into a wider and thorny discussion of streaming, just know that it especially in the absence of live sales, it does help us when you stream our music, especially with paid services like Apple Music or Pandora Premium. Also, please follow us on services that have that option.

In other news, I'll be teaching two Zoom songwriting workshops on March 20th and 21st thru the folks at the Walnut Valley Festival. You can get more information and sign up here. Then on April 1st, I'll be doing a guitar workshop thru the Blueberry Bluegrass Festival Info is here. Join me if you can. Until we meet again in person,

Hello all, and greetings from the Northern Studio in Alberta. As I write this, I'm on Day 13 of a 14-day self-quarantine, a government requirement after returning from my recent U.S. trip. More on that trip below, but first of all we have cause to celebrate: "Leave it at the Gate" became our 15th #1 song. We're so grateful to DJs and fans for their support and for making that happen. We're about to release a brand new follow-up single to that, by the way, a song called "Quiet Click," which we're really excited about.

Meanwhile, Mark Stoffel has been on Bluegrass Today's "Grassicana" chart with music from his brand new CD Coffee and Cake. Mark also has a brand new web site which you should check out. His CD is available there: https://markstoffel.com/

My trip to the U.S. was a chance to get the band back into the studio at Crossroads in NC to record 4 new tracks. We're feeling great about the results. You should see new music from these sessions after the first of the year.

I want to personally thank everyone who has attended my livestream shows, and special thanks to those who have generously contributed in this year that has been so  financially challenging for professional musicians (not that it hasn't been challenging for everybody!). I'll be doing more.

Before I sign off, just a reminder that streaming our music often is one way you can continue to support us. This link takes you to a lot of our catalogue on various streaming and downloading platforms: https://clg.lnk.to/tcdKV96i

Hello friends. Greetings from my Alberta quarantine headquarters during what is now pandemic week infinity. While you will notice an almost empty tour dates page (!) it will be updated soon, since most of our shows are not cancelled, merely postponed to some time in 2021. Note a new solo livestream concert listed there, though for Thursday August 20th.

Now the big news: on the heels of our 14th #1 song (and our first with the new lineup), "We Needed This Ride" we've released a new for Mountain Home called "Leave it at the Gate." They subject may seem ironic now, since it's sort of about not taking your work home with you, just as a lot of people are working from home. Leaving your work "at the gate" may have more appeal than ever! For this song, I've returned to my longtime writing partnership with former bandmember Jon Weisberger. There's a link for the new song on the home page but here it is, too:  https://clg.lnk.to/CJND-Gate-s Wherever it is you choose to stream or download our music, we really appreciate it. Also, please follow us on the streaming platform of your choice.

Other big news: Mark Stoffel, who has recently signed a solo recording deal with our label Mountain Home has released his first single and video called "Shadowbands." among other fine musicians, this one features brilliant Irish fiddler NIall Murphy. We met Niall when we were playing in Cookstown, Northern Ireland a few years ago and we got a chance to jam some with him after our show. Here's the video:

Well, check back here for more updates. Feel free to request "Leave it at the Gate" and "Shadowbands" from the DJ or your choice (even me ;) ), and please stay safe and well.

Welcome to the new Chris Jones & The Night Drivers web site. I'm Chris, or someone pretending to be him and doing a pretty convincing job. I may get inspired by the pandemic and even write something new here once a week. Please don't hold me to that. If you navigate around you'll find that for the first time ever, we have tracks available for download, with no middle man (but PayPal) in sight. There's also a handy link to stream lots of our music, both new and old, on various platforms. More tour dates, photos, etc. will be added soon.